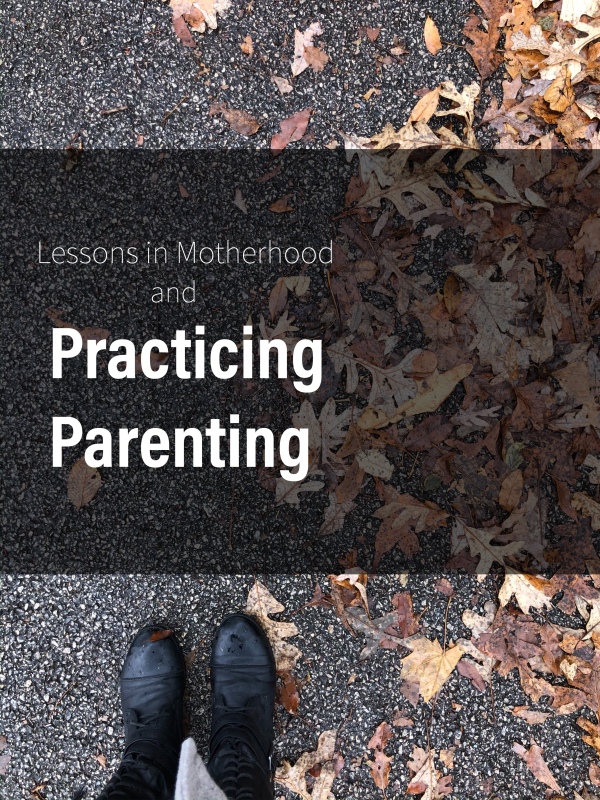 Last month in my “Lessons in Motherhood” post, I confessed that I have been having a hard time dealing with parenting my four little ones. I have been increasingly grumpy and short-tempered, getting easily annoyed and upset at my kids, and then feel terrible and guilt-ridden over it. So I was trying out a more positive approach to parenting using rewards instead of consequences.

Well, I’m back to say that I’m throwing out everything I said in my last post and starting fresh with a new perspective on parenting.

[You can read Lessons in Motherhood and rewarding good behavior if you want to know exactly what I am NOT going to be doing going forward.]

But FIRST, a recap of our “outdoor hours” for October.

[I modified my New Years resolutions in my Q3 Update to include 30 hours outside each month for the rest of the year.]

It was quite a month…

On October 1st, we spent the day at the pumpkin farm, enjoying beautiful 80° weather.

And on October 31st, we built our first snowman and went trick-or-treating in the snow – the first time I can ever remember having snow on Halloween [though it probably happened at some point].

In between, we managed to squeeze 30 hours of playing at parks, visiting zoos, picnicking on the back deck, riding bikes, walking Evangeline to school, and playing in the backyard.

Just for fun, here are some photo highlights:

Ok, so back to my parenting problems…

A story all parents can relate to…

A few days ago, around dinner time, my five-month-old woke up screaming and inconsolable after only ten minutes of sleep, while the timer started going off to take dinner out of the oven, and at the same time, my two-year-old locked herself in my bedroom.

There I was, trying to explain to a toddler how to unlock the door, while holding a screaming baby and letting dinner burn, when my three-year-old son began screaming from the bathroom for me to wipe his butt.

In that moment, I wished I was the one locked in the bedroom.

Not every day is like that, thank god, but there are definitely a lot of rough days when I am so tired and frustrated that I wonder, what am I doing with my life?

And yet, I always wake up with a new resolve to have a better day, to be a better parent, to find a better way.

And that’s what led me to Now Say This by Heather Turgeon and Julie Wright.

I read [or rather listened to] this book last year when we were having trouble helping my son process his “big feelings” and it was so helpful for me to see that his outbursts, which would have ordinarily been punished in a typical parenting model, were the result of him trying to learn a new skill: to process big emotions and channel them appropriately. So rather than giving him consequences, we provided a “calm down” space for him to go to process his big feelings of disappointment, sadness, or anger. And sure enough, the episodes became less frequent as he learned to ride the waves of emotions.

I mean, let’s be real, I don’t always handle my emotions very well, and I’ve been alive for thirty-two years. How can I expect my two-year-old to already possess this important life skill?

So, anyway, I’m back to this book again to learn what I can and hopefully become a better parent.

[Side note: it is easy to wish for better kids, but I think often the problem is that I need to be a better parent.]

After reading just the intro and first chapter, I’m already remembering a lot of the advice I had forgotten and I realized that I’ve [once again] been going about it all wrong.

What I WON’T do

So I will not be trying to control my kids’ behavior through punishments OR rewards [aka, threatening or bribing].

As I said in my last “Motherhood” post, my first reaction to a behavioral issue is to threatening with a consequence [“if you hit your brother, you will have a time out”] or bribe with a reward [“if you eat all of your dinner, you can have a treat”] in order to get them to behave. That’s how I was raised. That’s how I thought it was supposed to be done. Good behavior equals good things. Bad behavior equals bad things. But this type of parenting doesn’t teach my kids morality, it teaches them compliance out of fear. It doesn’t teach them to choose right from wrong, it teaches them to do what will be of the most benefit to themselves. And what I’m most afraid of is that it will cause them to hide things from me, suppress their feelings, and worst of all, lose their ability to think and behave autonomously.

However, this does not mean that I am going to let my kids walk all over me or give them whatever they want. Absolutely not. [I’m just as afraid of sending selfish, lazy, or entitled children into the world as any parent.]

What I WILL Do

First, I will read this book on repeat until I can master this empathetic, loving, intuitive method of raising kids.

It is foreign to me because I was not raised this way and I have never witnessed parenting done this way. But after reading it last year, I started following the recommendations and saw a big difference not only in my kids, but in my own reactions to them. This book teaches how to empathize with your child’s feelings while still holding the limit and finding a solution together. Unfortunately, over time, I went back to old parenting habits.

Honestly, I always knew I wouldn’t be a perfect parent, but I kind of assumed I could just do my best and “wing it” and that would be enough. But I am realizing now, five years into this, that parenting is like any other skill in life. It requires hard work and patience and humility. It requires practice.

So, after this very, very long ramble, I’ve gotten around to the point.

Parenting takes practice. So, I went to the library when I picked up Now Say This and got a whole stack of parenting books. And I am trying to make improving my parenting skills a priority going forward. Some of these things are so foreign to me or go against the habits I’ve spent the last five years creating that it will literally require focus and intention and apologizing and course-correcting for the rest of my parenting years to get it right.

But that’s what I’m committing to.

7 thoughts on “Lessons in Motherhood and Practicing Parenting”