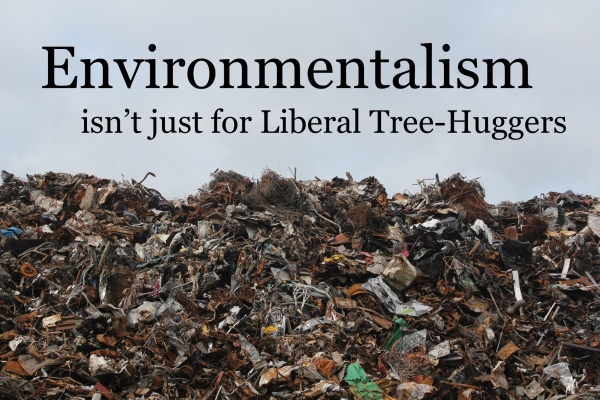 Why is it that taking care of the planet, protecting wildlife, and preserving our natural resources appears to only concern liberals and environmentalists? These are issues that affect all of us, so why aren’t we all on board?

If you watch the news, the “green” initiatives seem to be constantly touted by liberals while the conservatives are always on the other side of the screen shaking their heads, insisting “it’s no big deal.”

Since this is the impression I have always had of the two sides of the debate, I was pleasantly surprised to find in Jen Hatmaker’s book, 7: An Experimental Mutiny Against Excess, that there are conservative Christians [even Republicans!] with the same concerns for our shared environment. Of course, Jen is the only one I have ever heard of – and she only cared for a month – but still. This is progress.

She writes with compelling sarcasm that a belief in God as creator of planet earth is a great reason to start taking care of said planet.

I wish I could quote her entire chapter on reducing waste here, but you should really just go get a copy of the book. In the meantime, though, here’s a snippet:

“I’m a Christian author, so my deal is to write Bible stuff, and the hippies can worry with creation.

Does ‘creation’ have anything to do with God whom I call ‘Creator’? Oh, pish posh. Surely God isn’t worried about how we handle His creation that He created. His main concern is making His followers happy and prosperous, yes? And if we need to consume the rest of His creation to make us happy, then I’m sure God doesn’t mind. I bet ‘creation’ mainly refers to us humans, and the soil and rivers and animals and forests and oceans and wildflowers and air and vegetation and resources and lakes and mountains and streams are purely secondary, if not inconsequential.

If I’m taking my cues from many mainstream evangelicals, then only Democrats and loosely-goose liberals care about the earth. It’s a giant conspiracy to distract us from the abortion and gay issues, which evidently are the only subjects worth worrying about. Ecology is for alarmists who want to ruin our lives and obsess about acid rain.

This month the Hatmakers are doing their part, setting aside apathy and respecting the earth God made and loves.”

Thank you, Jen! I wish more Christians were drinking your kool-aid.

Truthfully, I don’t really care what your reasoning is for choosing to take better care of our beautiful planet – I just want you to do it. I want everyone to do it.

America has a definite waste problem. It’s not like we are without resources to do something about it, and we can no longer claim to be ignorant about it. So, why aren’t we doing more? We know it’s possible. We’ve seen the impact of a country committed to sustainability. Sweden not only sends a mere 1% of household waste to landfills, but they are actually making money off of other countries’ waste by using it to fuel their incinerators [source article].

Then there is America…

According to the EPA, we send 52.8% of our waste to landfills each year [source article]. Don’t even get me started on all the reasons this is terrible [but you can read about it for yourself in this article].

If both sides of the debate [virtually ALL OF AMERICA] could join hands and work together towards the goal of a greener future, then we could really get shit done.

And there is hope. If everyone identifying themselves as Christians would “go green” for the good of their religious beliefs, then a whopping 75% of Americans would be changing their wasteful ways. [2017 Gallup poll of religions in the US can be found here.]

Can we even hope for such a transformation? I don’t know, but I did get a little glimmer of hope from Jen’s book.

No matter your religion or political preference, everyone should be behind a more sustainable future for our world. I’m singling out Christians here because they make up the majority of people in this country with the greatest power to change the current consumer mentality that is doomed to fail in the long run.

Written by a Christian pastor’s wife, 7 is a great book that confronts our American culture through the lens of the Bible. For that reason, if you believe in the Bible, I highly recommend it. And I hope that reading it produces a wave of authentic Christianity like our country has never seen – one that encourages, rather than criticizes, recycling, composting, AND tree-hugging.

One thought on “Environmentalism isn’t just for Liberal Tree-Huggers”